I. Governing and safety system problems:

4. Extraction or back pressure cannot work.

5. Governing valve seal is not tight.

14. Closing time of the oil servomotor is too long.

17. Unable to run at full capacity.

1. The MSV can`t be closed fully under hot condition.

2. The MSV shut down automatically after it open to a certain extent.

4. The MSV can`t be opened in position.

8. The closing time of MSV / automatic closing device is too long.

1. The pressure of HP oil pump can`t reach to the setting value.

4. The temperature of turbine return oil is too high.

5. The oil cooler outlet temperature is too high.

8. It does not match the HP oil pump output and system.

A power plant had a C25-8.83-0.981 type steam turbine generator set which made in 1990s. The turbine was a hydraulic governing type with a cam steam distribution structure. After ten years running, the turbine is insensitive to changes in load with a large running delay rate. And its thermal load self-tuning is not high with poor primary frequency modulation capability. When shed the partial load, the adjusting quality can not meet the operational requirements. Considering above conditions, we can improve the STG control level and its adaptability by reconstructing its governing system into DEH.

I. Introduction the governing principle of the original system

As a hydraulic speed sensor, the governor oil pump measures turbine speed. The oil pressure difference between the inlet and outlet of governor oil pump is proportional to the square value of STG speed. When the speed change is little, the oil changes and speed changes can be down as a linear process. So we use it to make pulse signal of speed changing. One side of pressure transducer slide valve was controlled by speed pulse signal oil pressure, and other side was controlled by synchronizing accepting control operation signal spring force.

Pressure transducers spool valve controls the overflow of two pulse passages. When the governing oil pump pressure changing which caused by changed turbine speed, or pressure transducer spring force changed by operating synchronizer, the pressure transducer slide valve would move up and down. So the piston of oil servomotor would move by controlled oil servomotor`s inlet and outlet. It would drive governing valve and rotary diaphragm open or close in a same time. So we can regulate the turbine speed (in single-unit operation) or turbine load (in grid operation). When the piston of oil servomotor move, the overflow area of the feedback window was changed also. So the pulse oil gets feedback and return to the setting valve. The pilot oil slide valve would come back to middle position and the oil servomotor line is cut off and the STG would be in a new stable condition.

The pressure measure element is bellows-type regulator. The pressure regulator pulse signal is turbine extraction pressure. The function of bellows is changing the steam pressure into displacement and change the opening of the overflow window. It would causes the oil pressure changing of two pulse oil lines. The changing directions of two pulse oil lines are opposite because the changing opening directions of two overflow windows of pressure regulator are opposite. It means HP oil servomotor and LP oil servomotor moves in a same direction. It can change regulator spring preload by turning on the hand wheel on top the pressure regulator. So it can change the turbine extraction pressure. When the thermal load is incorporated heating network, it can translate regulator static characteristic curve, thereby changing the turbine thermal loads.

When we reconstructed the steam turbine, it was still on running. So the reconstructing period would be as short as possible. After considering the reconstructing period and turbine governing control precision, we decided to dismantle synchronizer, HP oil servomotor, MP oil servomotor and regulator only and reserve the original security part and oil suppling system, so we can reduce work quantity. We used direct-acting oil servomotor with an independent oil source as DEH hydraulic actuator. We used Nanjing Sciyon DEH-NK series electronic governing system. After reconstructing, the turbine running stable and each operating parameters excellent.

The main function of DEH-NK system is control turbine speed, turbine load and etc. DEH system accept input signal from the site, for example: OPS (speed), MW (power), PC (extraction pressure) and various control command form operator via LCD also. The electro-hydraulic converter was controlled by settled valve operation control signal which sent out after internal calculation. The height of HP valve was controlled by hydraulic system and its actuator. So we can complete the starting up, speed up, grid connection, loading, extraction adjustment and other function of steam turbine. It can make operation, protection, control, monitoring against various of conditions, so it can ensure turbine running safety and reliable.

● After connection to the grid, DEH automatically with the initial load in order to prevent reverse power running and it has a load limiting function.

● DEH can adjust STG load automatically according to the target value and load changing rate which all given by the operators.

● Deciding whether to participate primary frequency adjustment according to the need.

● Stop state can be simulated.

● Modified parameters and configuration can be down in the engineering station.

● It has friendly interfaces with other systems , such as TSI, DCS.

● DPU 1: 1 redundant configuration. When the primary DPU fault, it can switch to standby DPU automatically and unperturbed.

● It is formed by two parts of electro-hydraulic actuators and oil source station.

● Electro-hydraulic actuator is component by a hydraulic cylinder, servo valves, electromagnetic valves and others. It has two type of successive regulated and two position control. It uses of oil servomotor with sophisticated high-pressure and fire-resistant technology.

● Oil source station was made by oil tank, high pressure gear pumps, motors, pressure switches, pressure regulator valve, accumulator and other components. It was used energy-saving and environmental protection technology to achieve miniaturization design. It is decentralized and integrated into the relevant electro-hydraulic actuators.

B. Characteristics of this system

● Dynamic response time is less than 20 ms and switching time can be less than 0.2 seconds.

● It is particularly suitable for off grid STG. The governing quality can meet the requirements of rapid response under off grid.

● Actuator is small with easy to install. So it is very easy to use on-site and maintenance.

● Actuator has a strong output stiffness. It can also be adjusted online according to the site with completely free from the type of load.

Considering the STG actual operation condition and economy, we sent engineers to enter into the site to collect the data of STG installation and operation after the project is determined. A best reconstructing proposal was made according to the actual situation. We allowed the STG to keep running, meanwhile we organized reconstructing content, prepared materials and made a reconstructing proposal. After communication, coordination and cooperation between the customer and us activity, we completed the electric governing reconstructing in one week since turbine shutdown. We improved the customer`s economic efficiency after generation and grid connection.

B. Turbine running condition after the reconstructing

● Diversity factor of the speed: 5%

● Diversity factor of the extraction: 10% 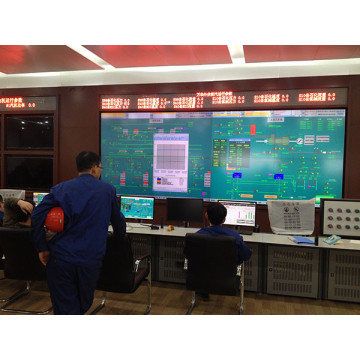